to be
soft
is
to be
powerful
– Rupi Kaur, Milk & Honey 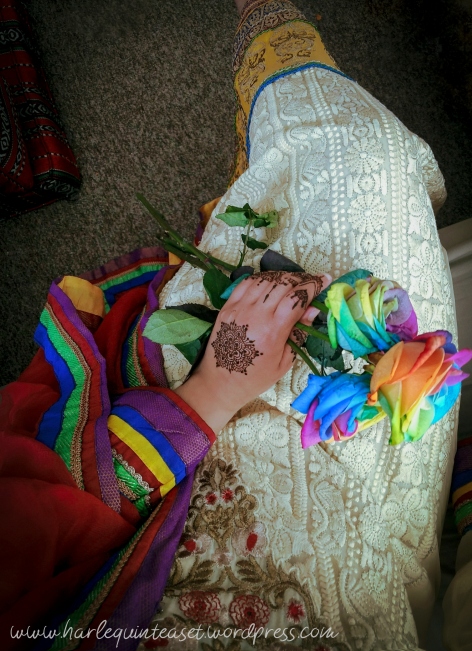 One of my favourite things about winter (when I‘m not shivering from the minus-degree temperatures and binge-eating seasonal chocolates) is to look for all the beautiful lights which have been installed around the city. Because it gets dark so quickly (at the moment, the sun has been setting at 4pm) it’s easy to explore all the lights in the area and see how lovely they look.

Unfortunately, I’m sure many of you photographers will know that the bane of taking photos when going out are low-light photograph – it’s difficult to get a decent picture without it being too grainy or blurry! Here’s one my husband took of me after dinner, where we explored the O2 arena a few weeks ago and strolled around. The best thing about this was the night-time atmosphere, there were plenty of tourists and lots of shops and restaurants open, which really created a pleasant buzz.

One of the things I am intending to do this year is to learn when to relax and enjoy the moment – I’m one of those freaks who is always simultaneously Snapchatting, Instagramming, Whatsapping and using a DSLR to capture a beautiful sight. Thankfully my husband is used to it, but it’s something I’m trying to cut down on! Let’s see how it goes this year – quality photos over quantity!

I’ve been a busy bunny these days, so it feels like I hardly get time to blog. It’s frustrating as heck because I have a few blog posts to write and a few book/food/cupcake/city reviews to write and I keep getting caught up with domesticity!

I’ll do my best to post this weekend, but in the meantime, here’s a beautiful sunset hubby and I caught last week while dining in Canary Wharf. I feel like I don’t see enough of these (either the day is too long or the sky is too grey!), so this was a special one for me – first sunset picture in ages! 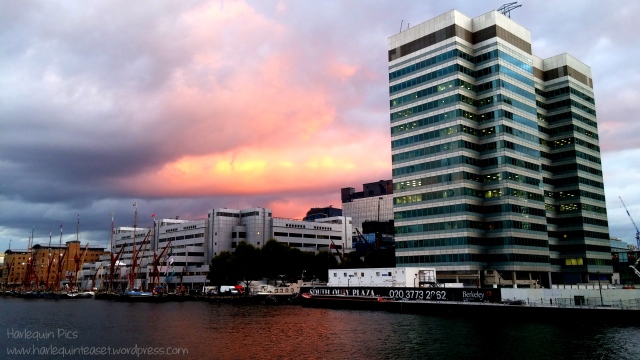 It‘s not often I get a chance to stop at beautiful gates like this, but naturally when they come on a beautifully grand scale like this, a picture must be taken. It brings me to mind stories that I’ve read in the past where the hero (or heroine) has to reach the gates fast enough to get their happy ending – or even Greek Tragedies like Orpheus and Eurydice‘s tale of lost love. Inspiring enough to try my own hand at a fable like this, if I manage to finish it, I’ll post my story!

I’ve been noticing the flower‘s which are budding, the sky getting lighter in the evenings and the brisk air getting warmer by the afternoons these days, which means spring is on it’s way, along with (hopefully!) warm weather, colourful gardens and lots of grass in my garden which will all need cutting.

So here’s some blossoms to start the week with, symbolic for new beginnings, fresh colours and a promise for the rest of the season : ) 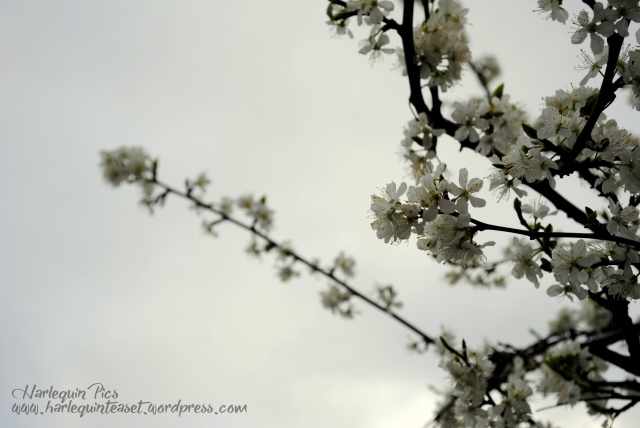 I love a wander around London Town, there’s always something different to catch my eye, which I’ve never seen before. I’ve lived in London for my whole life, and I’ve always travelled to and from the main central streets, roaming around east London, crossing over the river to South and venturing towards West and North to see more beauty, and yet I never fail to see beautiful things.

This is something I saw after work a couple of days ago, after a spontaneous walk around Carnaby Street for some dessert and shoe-(window)-shopping, and saw this tucked away in a side alley – a small, busy restaurant between two streets, with orange and yellow light bulbs hanging criss-cross across with wires and hangings, bright lights floating above.

(What completed the scene was a man in costume shouting his wares under the lights a little futher down, trying to pull customers into the restaurant, while a group of school boys threatrically pretended to be scared by the mask and screamed).

If I find the restaurant again, I’ll be sure to go inside and see if there’s more lights, but for the moment, these make beautiful aritifical stars in the night : )

I thought I’d try some spontaneous writing, that is, giving myself a certain amount of time, be it 10 minutes, 20 minutes or half-hour to write a story within the constraints of a certain number of words. It would give me the chance to practice story writing and hopefully force me to write something even if I didn’t like what I wrote (which happens a lot!)
This was meant to be a 50 words story but I got a little carried away, so here’s my version of a 200 word story, which was still pretty difficult because of the re-writing and editing I had to do. Have a read, and do let me know what you think!

She turns the corner, following the watery pinpoint of light leading her to a hazy freedom. A scuttling sound pings behind her, making her grope at her sides to the craggy wall to spin around in the now-silent dark. Waits, until the scraping sound comes again, she imagines its closer this time, making her legs urge her forward, her walking becoming a hurried shamble. She trips, stumbling over the rocky path, breathing louder until she hears that shuffling coming closer behind her.

She’s no longer hiding her fear, speeds up to a rushed jog, jagged breath while desperately praying that the thin stream of light won’t suddenly end – running now, muscles burning and eyes streaming with unwanted tears. The noise grows louder, it’s thundering in her ears now, the harder she runs the louder, each stamp of her foot feeling like it is bringing an ominous cymbal crash upon her.

Her eyes see more light, sees an opening, her precious stream of light growing bigger. The floor beneath her slopes up making her scramble, clinging and climbing upwards into a unforgiving brightness and onto a gravelly floor, soil and dust announcing her arrival.

Turns around.
To face what is coming.
To face?

There! That noise again.

Looks down…seeing a chain hooked onto her shoe.

Once of the landmarks we visited while in Turkey was the Basicila Cistern, which is one of the biggest ancient storage units underground the city of Istanbul which was designed to hold water. It was surprisingly busy going in, but once we got in, we could see a huge underground cavern which would have plenty of space to hold visitors.

It was quite dim in the cistern, so I wasn’t able to take clear pictures with my camera and had to use my mobile camera, but the view was pretty spectacular and there was a very eerie, mysterious atmosphere to the place.

The most striking part of the cistern and its pillars were two Medusa heads which were carved into the bottom of two pillars – one was upside down, and one was placed on its side, apparently, deliberately so. There’s a lot of ideas why this was done, but no one really knows for certain. I noticed a lot of Medusa motifs around this city; restaurants, shops, artwork and symbols in a lot of discreet places, which I thought was an interesting link to Greek mythology, and probably points to the diverse history of traders and inhabitants of Istanbul over the  last few centuries.

It was fun to see another side to Istanbul, the quiet, atmospheric and mysterious caverns which gave tourists a chance to wander around and enjoy some peace. There was also an opportunity to dress up in traditional Turkish costumes and take photographs in a photo booth on the side, which looked fun, although we didn’t do this because it was busy and I was a little embarassed! 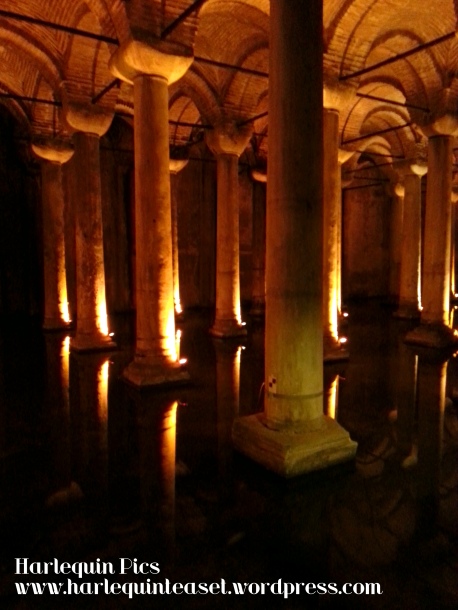 I’ve been a little out of the picture lately, but I do have lots to post about! In the meantime, enoy this favourite memory of mine, when we visited Lulworth Cove which was a beautiful, peaceful place with amazingly blue water. We didn’t see any pirates, but the place did remind me of old Enid Blyton books where the heroes hid behind cliffs watching pirates using coves to hide their stash. Or something.

I’ve made you want to go read an Enid Blyton book now, haven’t I? 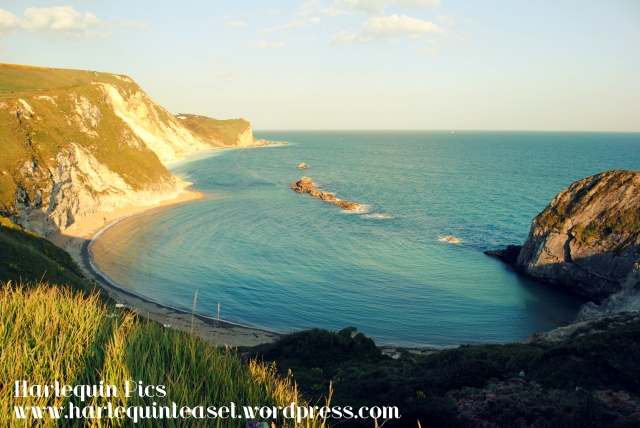 I went to the wonderful Harry Potter Studio Tour a while back, and thought some of the sets, costumes and details were amazing – I’ve said before that I won’t post too many photos so I don’t ruin the experience for anyone who wants to go, but I thought I’d do a quick post of a shot I took of the Potions room, which was beautifully laid out with bottles, glasses, beakers, potions and of course, cauldrons.

I love the atmosphere of this photograph, there wasn’t a lot of light so it was almost a night-time view, but it worked because of the soft glow of the lamps and the blue shades in the shadows – you can almost imagine a student creeping through the room trying to steal ingredients or hide from Snape!