The most iconic places in Istanbul are the Blue Mosque and the Hagia Sofia. Surprisingly, we found that when we asked the locals where the Blue Mosque was, they didn’t know what we meant until we called it the Sultan Ahmet (similarly, I’d been pronouncing Hagia Sofia wrong, which is pronounced Aya Sof-ya).

Both of these places are beautiful relics of history, each rich with art and stories which span over a long period of time, and iconic landmarks of the Ottoman era. Naturally these were at the top of my list of places to visit in Istanbul, and not just mine, both places were very busy!

Below is the Sultan Ahmet mosque, which is called the Blue Mosque because of the beautiful blue tiles and patterns in the interior – it is still an active mosque and open for prayers, so it is also a beautifully peaceful place because of how serene it is inside and how well looked after it is. I’ll let the pictures do the talking, it was quite dim inside though so the colours are less vivid in my photos. 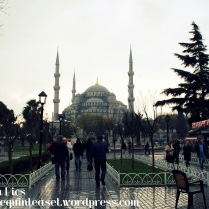 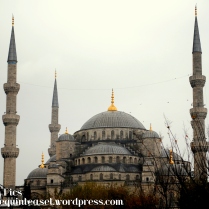 The Hagia Sofia is directly opposite the Sultan Ahmet mosque, and is different in that it is now a museum – it used to be a church, then was turned into a mosque by invading Ottomans, before it was restored to its current state. I love that it looks pink from the outside, and that the interior strives to maintain the older, Christian art alongside the Islamic art pieces. Because it is a museum there are plenty of tours which take visitors around, and we managed to go up to the second floor which was a lot more cobbley and slopey, but also very atmospheric. 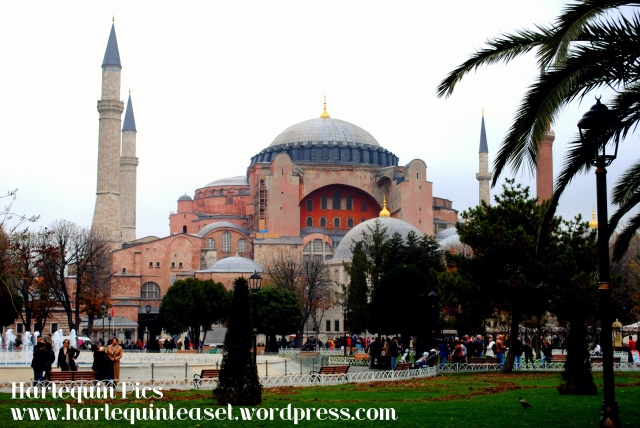 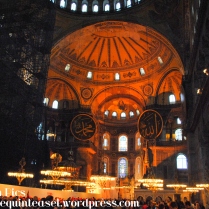 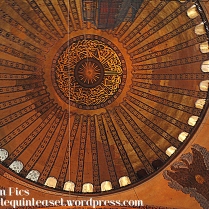 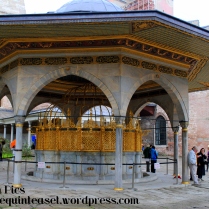 It’s amazing to see just how close these two iconic landmarks are to each other – I tried to take a panoramic shot to show how short a walk they are from each other. I like that they face each other and that citizens openly visit both places – it really symbolises the contentment of this place. Istanbul is made up of Old City and New, and European Istanbul and Asian, which really reflects in the way these two are positions, they face Qibla (the direction of Mecca) and yet allow visitors of all religions, nationalities and origins to come and see their beauty.

This was a very memorable visit for me, particularly because of how grand the two places are. There are certainly bigger, more beautiful and more luxurious places in Istanbul than these two places, but it is clear that these two are icons which appeal to everyone for their beauty and what they represent.

One thought on “Honeymoon Travels: The Blue Mosque & the Hagia Sofia, Istanbul”