to be
soft
is
to be
powerful
– Rupi Kaur, Milk & Honey

We held our annual Eid Party last week (which is always very popular with the under 6s, especially when we lay out our candy bar and fruit table), and this year our theme was spring greenery and flowers. Initially we threw a few ideas around, and wanted to go with a nice peachy-and-mint theme with a vintage feel, but we thought that this would get trashed in about three minutes after all the rabble turned up, so we changed the theme to something a bit easier to do and which looked pretty (and girly!) too.

Of course, as with all of our parties, we had some amazing food, not least because several of our lovely guests contributed dishes and desserts for the party too – you can see below a sample of what we ate!

The highlight of the party though, was probably my two baby nieces poking at each other and pulling legs while they looked bewildered – adorable!

The A sisters and I held our first family Chand Raat party yesterday, which basically consisted on a bizarre version of ‘Secret Santa’, dinosaur themed mehndi (who says boys have to be left out?), a couple of yummy large pizzas and old family wedding videos to complete the evening (and there’s more pictures of the mehndi here). 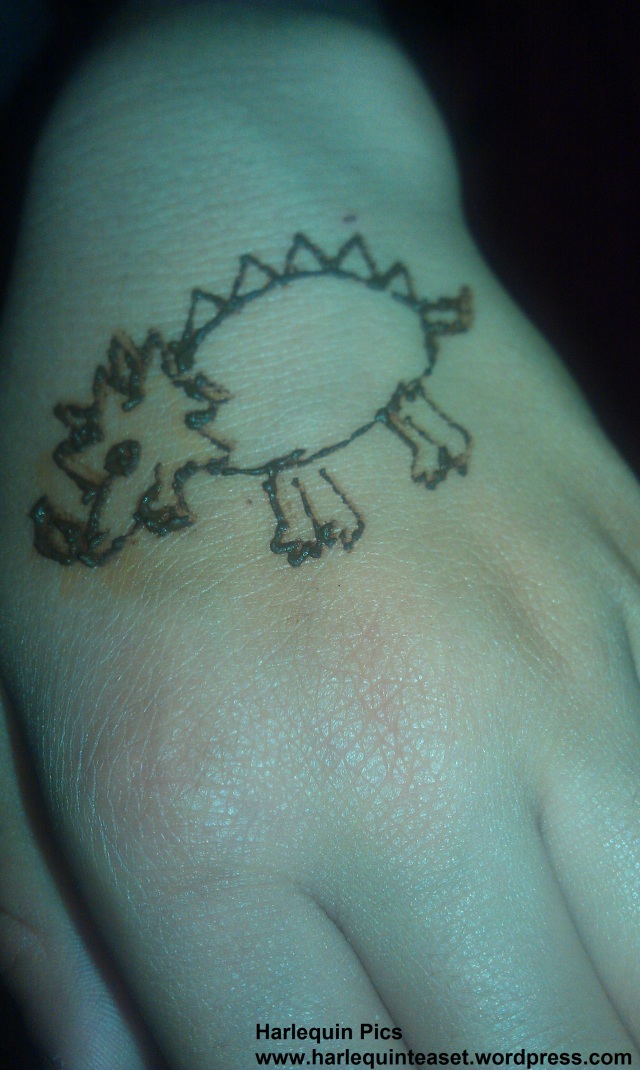 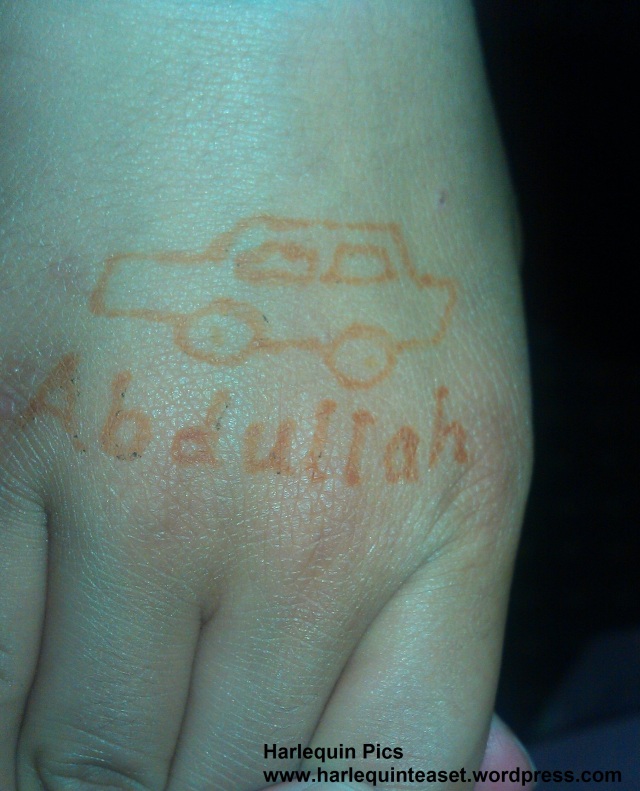 Highlight of the evening has to be this sparkly ring given to me by one of the girls, just look at how cute it is! And it’s head and legs even move!

Several hours of wedding tapes. several pizza slices and mounds of wrapping paper later, I would say that out first Chand Raat party was a success. If not only because of the hilarious 1980’s fashion and puffed hairstyles, I would recommend you all try one with your sisters or cousins : )

The Annual A Sisters Eid Party arrived last weekend after much anticipation and excitement, with the sisters going all out in style. After much discussion and heated drama, it was finally decided that the grand theme this year would be rainbows, for the sake of the children being happy (and probably because it’s an easy theme to follow). This reporter eagerly followed the organisation and the range of events which resulted on that evening, after much excitement and mystery about how the extravaganza would turn out. With many glamorously dressed guests and similarly boisterous children, the sisters told this reporter how much effort had been put into the event, and how some things had almost gone wrong on the night last-minute. “We almost ran out of wrapping paper,” stated one sister with real concern, “and my shoes just DID NOT match my outfit, which was a real blow, but in the end we made sure that the lights were not too bright so people wouldn’t look at my shoes too much. Plus it’s considered cool to have shoes that don’t match.” Another sister reports how she felt that she found it difficult to choose from the sweets to eat, and had to be helped by the younger guests to make a final selection.

The evening was full of many games, although it did not always end well for some – in more than one case of pass-the-parcel there were tears and huffing-and-puffing until the guest got the sweet she felt she deserved. And the children’s games were even more trickier, it was easy to see how they were bouncing from the walls after all the sugar they had consumed.

Part of the preparations were these crackers made from tissue paper and wrapping paper, inspired by this creative blogger, although these were considerably less neater (and probably full of more junk). Not that it stopped the children from tearing them apart with glee – no one stops to appreciate creativity these days do they? 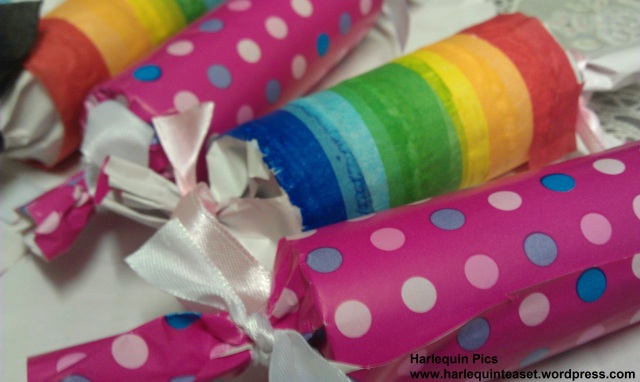 And of course the delectable edibles  were of a similar high standard, having been hand picked from only the best shades of colours and with great care. This reporter is pleased to report, in fact, that the  rainbow lollipops (see below) were a surprisingly popular choice, with the cups of sweets seperated into indiviual colours winning the much coveted  “Best Presented Candy and Colours” prize in the Sweet Food category for the Glam Awards 2011. The sisters were especially pleased that they had been nominated at all, gushing “It’s all for the kids, really” adding “although the prize money will come in handy in replacing No7 cream that’s run out.” 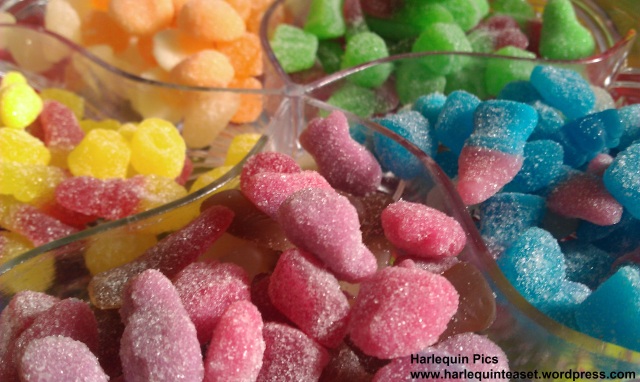 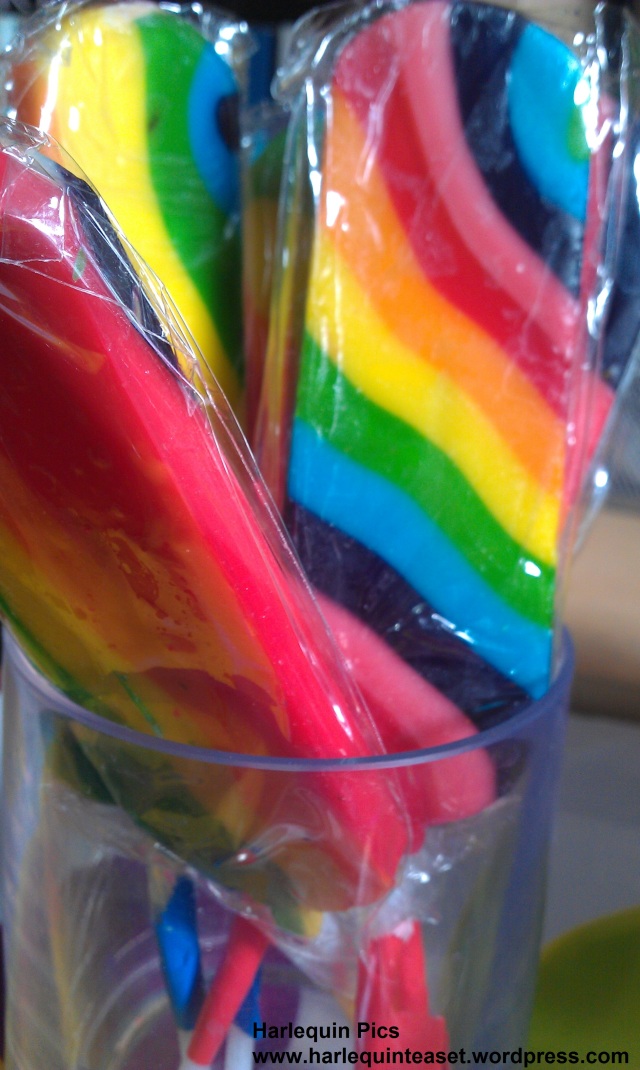 A lovely touch was the Rainbow Puff sweets to add to the theme, bringing back a touch of the ’80s memories for those guests who remember them from their childhood. Sadly, the veteran sweets did not appeal as much to the youngsters to preferred to stick to the jelly babies.

There were  also, however, healthy alternatives for those who didn’t want to overload on the sugar – the natural sweet tastes of this mix of juicy strawberries, raspberries and blackberries were a welcome sight. Not surprisingly, these disappeared down the mouths of several guests, with just a sorry bowl of red juice left as a reminder of their contents. 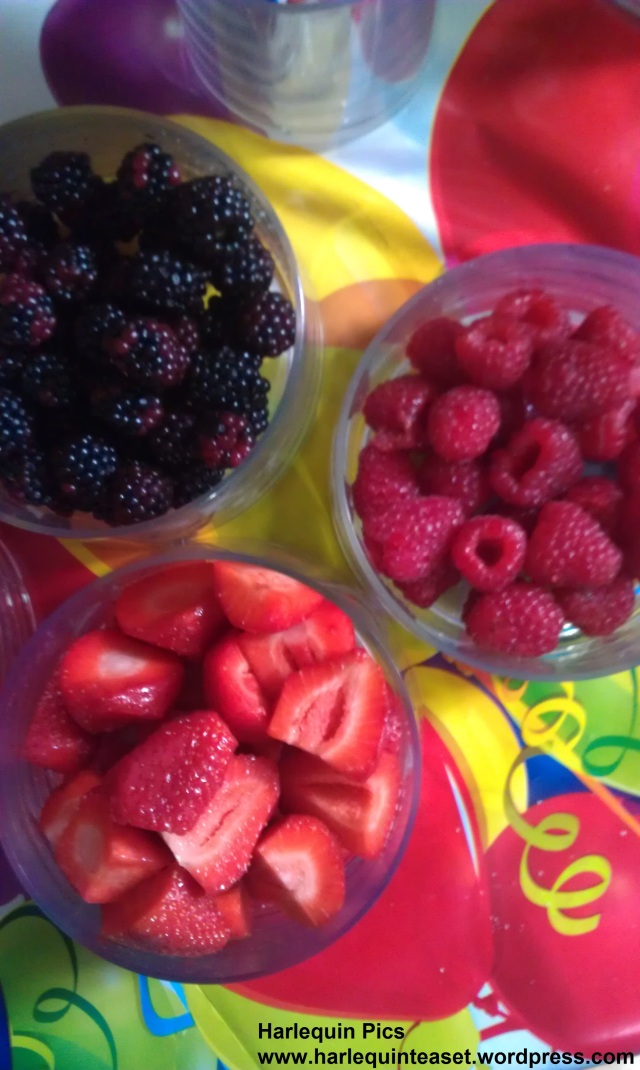 And of course there were rainbow prizes to be won and bangles galore for all guests, (not to mention the surprise goody bags each guest went home with), and plenty of silly stories told by all.

The Sisters were not alone in their well-presented food however, as there were plenty of home-made goodies brought by several of the guests, beautifully made sweets, cakes and dates which were admired by all and eaten just as quickly. 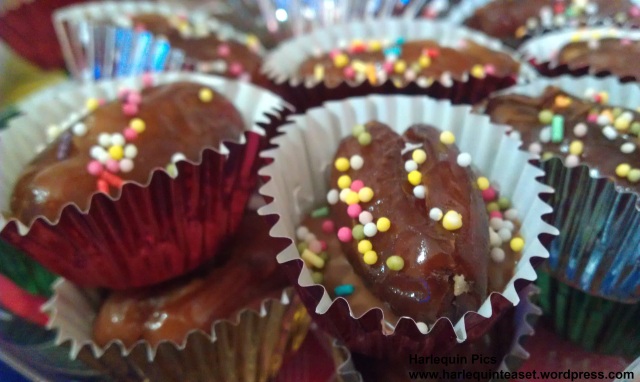 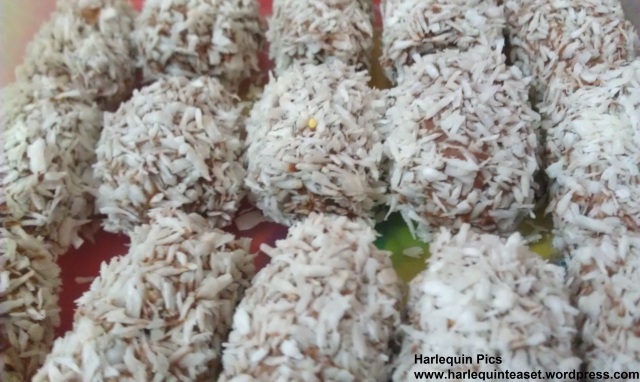 And what can one say about the decor? With the hand-made decor to bring a smile to all, and balloons to be popped, this was a feature which fit right into the rainbow theme of the party. 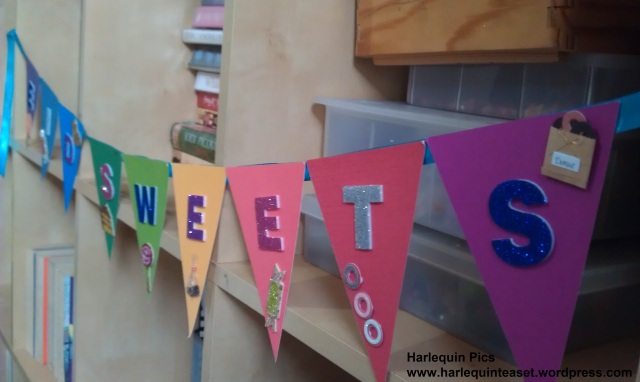 The rainbows of this party was a success, and I can pretty much say that the guest went home happy, tired and full of cupcakes.
More reports of the extravaganza can be found here, with various opinions on how the night went with all the games. But don’t believe the rumours about the mismatching shoes though, gentlebeans and jellygirls : )