My sisters and all recently went (although all of us at different times!) to the Halal Gems Street Eat Food Festival at Spitalsfield Market in London, which was an a pretty iconic event in that it brought more attention to diverse halal food, for Muslims and non-Muslims.

I’ve been to food festivals before, and even halal food festivals, but this one was an interesting one to go to because of how much publicity it got, and the different vendors who would be at the event. One of the things we liked was that there was a lot of fusion cuisines, and a chance to try food from places I’d been meaning to visit but hadn’t got around to (either because the restuarants were a little far away or I jsut never got the time!)

I managed to try a slow-pulled smoked brisket burger from Meat & Shake, haloumi fries from Oli Baba’s and a mango soda from Square Root London and finished off with my friend’s tumeric-and-brownies ice cream sandwich from Blu Top – all of which I really liked. The food was a little pricey for a food festival for me, and the queues were huge (although luckily I came early so didn’t have to wait as long), not to mention some foods selling out so not everyone got a chance to try it! I was disappointed that I wasn’t able to make the most of the different dishes because I got full pretty quickly, and the fact that I couldn’t spend too much, as some of the food was a little expensive.

I think this was aimed at a lot of younger families and working professionals, and certainly we saw a lot of these at the event – people who had come for lunch, after work or even just with their families.

I think it’s a really nice way to bring halal food to the fore and raise awareness, and we saw a lot of non-Muslims enjoying the festival as well. We also managed to make the most of the games available – although I will admit, we managed to get distracted from these by the shops and markets nearby and ended up shopping instead! 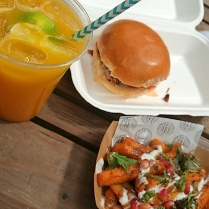 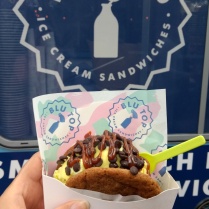 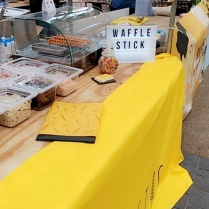 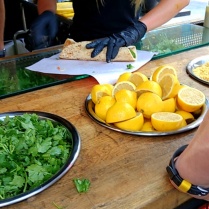