“You know, part of me thought if I told my speech myself then at least you get to feel a little bit of what it is like to be m. That if my QC did it then maybe you would all be thinking, ‘Yeah, it’s all very well to put it over all shiny and slick but that fucker’s still a murderer.’ And I really did think that if I told my own story I could make you feel my life. But actually explaining the evidences is out loud is proper hard.”
– You Don’t Know Me – Imran Mahmood

You’re guilty until proven innocent. Perception is reality, that’s the way that it is in this world.
– Chris Webber

A young man is in court, on trial for murder. As all evidence seems to point to him being the culprit, the unnamed defendant does the unexpected, and sacks his lawyer. There are eight pieces of compelling evidences against him – now he will stand up and tell the real story about what happened.
His life is in the hands of the jury who are listening – but can he convince them of his innocence?

Mixing inner-city ‘London-speak’ and slang with intelligent insights and a perspective into the justice system, the young man describes the events which has led up to his trial, asking us to consider an alternative course of events which lies behinds his innocence. 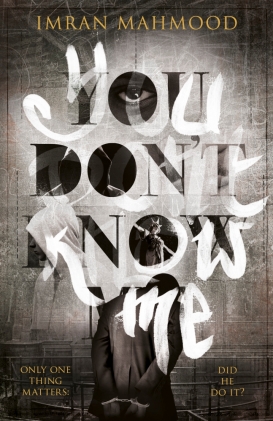 I thought this was an interesting take on gang culture, social influences, poverty and and the idea of racial profiling and the opportunities available for young men in London today. It sounds like a pretty heavy read, but it’s quite easy to follow, and it’s interesting to see how an intelligent young man presents his story – his way of life, the South-London culture he is immersed in, and the choices he has to make.

The language of the novel is fairly informal, but it flows well enough that it feels credible (although I’ll admit, certain aspects of the story line were a bit dramatic!) It’s also easy to follow – there’s one narrator to keep the story readable, which makes a change from a lot of stories which can be confusing with multiple perspectives. It also helps that the main character is pretty likeable – he tells his life story, which is be sad, funny and moving, and one which keeps you reading.

As a Londoner myself, I thought this was quite an interesting book – I loved seeing the familiar place names, slang and things that the characters do, although there is also a lot of the culture in this story which isn’t so familiar. While I do believe that there is a prevalent issue with drugs, gangs and peer pressure in today’s society, it felt a little too magnified in this book (although this may also be down to the fact that the author of this novel is a lawyer who has spent 25 years defending a mixture of inner-city clients).

I thought this was a really interesting read; while the conclusion is pretty unexpected, which might not appeal to everyone, the character’s voice was interesting enough to keep me reading to see what happened. It takes time to get into the language of the story, but it’s engaging enough that the characters feel well-drawn and the premise of the story is followed through quite well. At first, we see another young, vulnerable black man in London caught up in gang culture, with low prospects and not many opportunities – but through it all, we also that though he is surrounded by poverty, domestic violence and a drug culture, there’s also positives which shine through, as the strong women in his life who are important to him, the loyal friends who stick by him, and the prevailing love he has for the woman who is at the centre of this story.

You Don’t Know Me is available to buy on Amazon and was sent to me by Netgalley in exchange for an honest review.