They said red lipstick was for married women, and young girls should stay in soft pinks, so I did not wear red lipstick.

They said married women didn’t have time for makeup and should focus on their homes, so I did not wear red lipstick.

They said red lipstick was for a bride and I should not try to outstage her, so I did not wear red lipstick.

They said that red lipsticks were for young women, and I should wear more mature colours, so I did not wear red lipstick.

They said that red lipstick would look better on my daughter, so I did not wear red lipstick.

They said that I was too old for lipstick, and I should act my age.
I laughed at them and wore my lipsticks, pillar-box reds, rich scarlets, deep crimsons, blazing rubies, vibrant burgundies.

I bring life to my face with creamy sticks of red, embracing my feminine wiles, my brazen girlhood, and I will not be ashamed.

I wrote this poem with much deliberation, after reading a comment on my social media that someone made, which I thought was interesting. – the girl stated she had been told not to wear brightly coloured lipsticks because only married women should wear this. It brought to mind a few memories I have of being a teenager, and being told not to wear red lipstick by an Aunt who was a family friend, because red lipstick is for married women and not single young girls. I thought it was interesting that a specific colour had been relegated to relationship status, as if it would almost be vulgar to wear a bright colour, and even bring attention to myself. I’m familiar with this concept, the idea that you should not bring attention to yourself, not wear something inappropriate, as well as the many connotations which come with things like red lipstick.

Red lipstick, apparently, means that you are an attention-seeker. Loud. Inappropriate. Not religious. Not a ‘nice girl’. I like to think that these attitudes have changed a little over time – I’ve seen many girls see red lipstick as a staple in their makeup bag, and less something which is saved for their wedding day.

Nevertheless, I’ll admit, it did take me a few years to wear red lipstick – I think I was in my early twenties when I braved it, and then wondered why it had taken me so long. Even my husband, who is wonderfully open-minded and has never told me what to wear or what not wear, told me that if I lived in Pakistan I would probably have thought twice about wearing it. Coming from a fairly traditional, culturally-infused upbringing, my husband’s interaction with red lipsticks was limited to being something associated with married women, worn by women for their husbands, and rarely worn outside the house. Pink lips are so much more acceptable, softer, feminine and less sexual.

My own point of view is that while  I understand the intended view behind it – a woman’s image and her beauty is meant to be protected, and drawing attention to it can bring issues – it’s unfair to simplify things as if a women’s ‘honour’ and image is all that she is, and that she is ruled by them. I guess a lot of this stems from the whole South Asian culture of a woman’s image, the idea of honour, and how this can get mixed up with traditional values which now feel outdated to us.

I recently read a story told by a blogger that I admire, who told a story about when she visited Pakistan – she was told off by her mother for smiling at a man in a supermarket, and told that she should at strange men. She may consider it to be  friendly, but they may construe it to mean something else.
I could certainly understand her resentment – and what I dislike is that the onus seems to be on the women to limit herself, and hide herself. Whatever happened to the male gaze? Why not break apart the idea that the responsibility lies with the women and how she must take care in how she looks, who she looks at, and how her actions are responsible for her situation?

So I guess when it comes to red lipsticks, I resent the fact that there is a lingering mentality that to wear red lipstick is to be brazen, overly-confident and ‘modern’ – and it’s even worse to me especially, that a lot of the comments I have received, and other girls get, are from older women in our society. I believe there is so much more to women that shouldn’t be reduced to how much make-up they wear, that  being confident isn’t a negative thing, and that perhaps things like red lipstick shouldn’t be treated like a dirty thing.

Below, a picture of all the red lipstick I own. 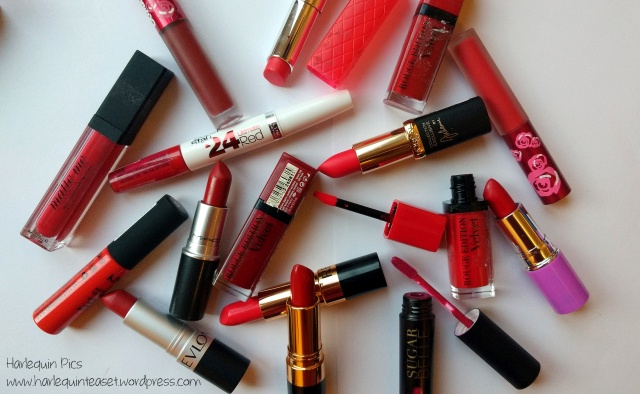