But I believe above all that I wanted to build the palace of my memory, because my memory is my only homeland.
Anselm Keifer

It’s not often that I find a book which strikes a chord with me, even if it’s not a topic I don’t know much about or can relate to as well as others. It brings me to mind similar novels, simple yet amazingly written stories like ‘The Curious Incident of the Dog in the Nighttime’ and ‘Room’, both which handle sensitive issues well yet still engages the reader to a level which makes us think about the book long after we have finished reading. 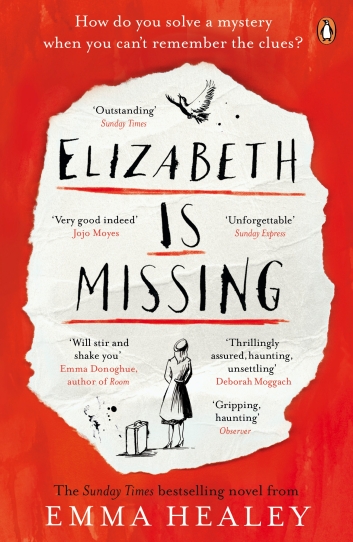 Elizabeth is Missing follows the narrative of 80-something-year-old Maud, who has been forgetting things more often lately, suffering from a growing but unnamed problem (which could be dementia, Alzheimer’s or just elderly senility), that makes her forget where she puts things, how many tins of peaches to buy (even though the cupboard is already full of them) and at times, who her daughter and granddaughter are. But Maud has her good moments too, gossiping with her friend Elizabeth, her love for her daughters and her granddaughter Katy, and the fact that she still has her own house that she can walk to the local shop from.
Lately Maud has been concerned with her friend Elizabeth, who has gone missing and which no one is telling her about, which causes ripples further than the questions she asks. Despite being told not to worry by her daughters, Elizabeth’s son, her caretakers and even the police, she becomes more and more convinced that Elizabeth is in danger.

As we follow Maud’s investigation into this disappearance, we see that she is hampered by her inability to remember things which happened just a few seconds ago. Yet there are some things from her past which come much more vividly to her, most importantly the circumstances surrounding the disappearance of her older, newly-married sister Sukey when Maud was a teenager 70 years earlier, and the subsequent incidents following her disappearance and the fact that she was never found. Remembering back to her sister’s life following up to the time she went missing, Maud also examines the strange behaviour of the people who knew her, such as her husband, her parents, their lodger and even the crazy lady who lives up the road.

As we follow both of these mysteries, we see how Maud’s obsession with Elizabeth’s disappearance parallels her memories of her sister, interconnecting past with the present so that her quest to find Elizabeth begins to overlap with Sukey in her mind and her memories as the book goes on. While we may not necessarily be able to understand how dementia feels, it’s beautifully written so we are able to sympathise with Maud’s fragmented mind, drawing us into the story even when the scenes feel so every day.

I read this at the same time as ‘The Girl on the Train’, and although both feature mystery, missing memories and a feeling of disorientation, the results are a lot more striking in difference. While in The Girl on the Train can made me feel a little lost and even disappointing at times, Elizabeth is Missing successfully lets us see the effects of old age and dementia even while we are lost with Maud. Throughout the novel, whether it is the elderly Maud we see or her 15-year-old version, her character is unforgettable – funny, warm and even at times unexpectedly impressive even when her frustrating memory loss lets her down.

This sounds like a depressing novel, but it’s not – there are comical moments in the mundane, ordinary events of Maud’s life, beautiful moments in the midst of heartbreak, and her character is one we embrace, rather than be embarrassed of. Not only does it address everyday routines we take for granted, it unwaveringly presents the embarrassments, the small frights, the patronising attitudes and remarks, and the simple limitations that comes with old age. And whether it is funny at times, embarrassing or even moving, these little stories all ring true to life. It’s worth a read to see another view of everyday life, even if it’s to answer that age-old question “Where is the best place to grow marrows?”