We decided to have a day out this weekend, making the most of the Bank Holiday and not having to go work the next day (yaay!) by taking a picnic and surprising my sister with a day out at Willen Lake.

So we took the kids, made some snacks and nibbles, took some badminton rackets, balls and a cricket bat, and headed up to the park and hid. Meanwhile, my sister’s husband dragged her to to the park with their little daughter and went around in circles in the same part of the park, to her bafflement, while we all hid (I came late so didn’t hide) behind bushes and shushed the kids.

Finally she spotted us and the look of disbelief on her face was something to see – although it was less of a surprise after the toddlers ran towards her instead of hiding!

We had a great day though, and managed to take in the sights (and the kids managed to hijack the children’s play area which made their day). My husband and I wanted to try some boating, but it as too cold and windy so we promised to come back in the summer when it’s hotter to give it a try (that way he won’t mind when I push him in the water!)

Here’s a few snaps of the day, I didn’t take many photos as we were too busy playing games and eating, or chasing little toddlers around – but I do love these shots. The ones of the swans are one of my favourite, there’s something dreamy about them all gathering together : ) 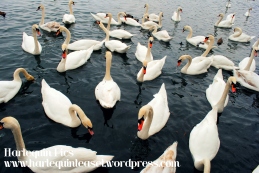