I visited Liverpool Street to have a meal at a pretty restaurant recently, and saw this in one of the Squares around the restaurant which I really liked. Created by English sculptor Denis Mitchell, this is a huge piece of metal work of a beautifully embellished horse with a knight sat atop it. It represents, apparently, King Edgar’s gift of land to his knights, which was measured “the distance a horseman could throw his lance.”

So pretty beneficial for the darts-players, really.

The blue stones in this are my favourite bit, they’re beautifully bright and really accentuate the whole piece to make it an almost romantic piece – makes me think of French courtly tales and knights from the middle ages almost. The statue itself is pretty big, standing next to it we could it was at least twice the height of one of us (if not more) but that just makes it look more majestic. It’s situated in a quiet area too, so you get plenty of people wandering around in the peace and taking pictures : ) 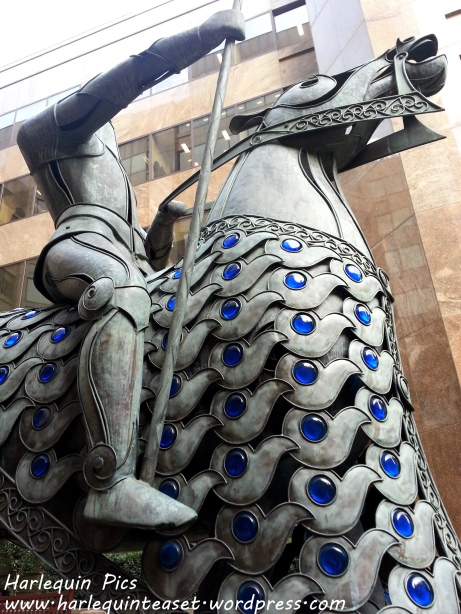 2 thoughts on “Knights and Proud Horses”